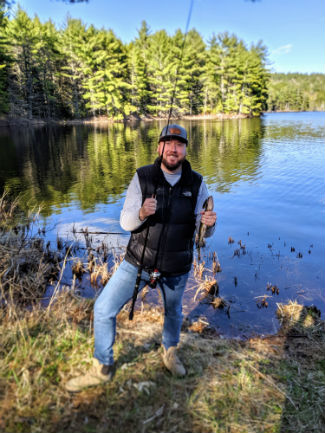 Maine native David Falls enrolled in the Bachelor of Arts in Business Administration with a Management and Leadership concentration online program at the University of Maine at Presque Isle after moving across the country to Billings, Montana, in January 2017.

After returning to Bangor in late 2018, he got a job as an eligibility specialist for the state’s Department of Health and Human Services.

“Being out there in Montana away from friends and family helped significantly with school,” he said. “There were virtually no distractions besides work, so I used the time before and after work and on the weekends to complete my studying and projects.”

Falls first read about UMPI’s competency-based education (CBE) programs in the Bangor Daily News online. He jumped at the opportunity.

“The prospect of finishing a bachelor’s degree program in less than two years was very appealing and caught my eye immediately,” Falls said. “Going back to school to earn a bachelor’s degree in business administration had been on my mind since 2012. I most likely would have never completed the degree without this model of learning.”

The YourPace online BA in Business Administration program allowed Falls to work quickly toward his goal. In fact, he knocked out 69 credit hours in two semesters.

“I didn’t have to wait for projects or papers or exams to be assigned to me,” he said. “As soon as I started the CBE course, I knew what the final was, so I could begin working on it right away or work on it as I progressed through the learning material.”

Hoot, There It Is

“After graduation, I moved from Old Town to Portland, where I could not find a job in the construction industry,” he said. “So, I worked retail for a year before I was introduced to Unum and became a full-time employee in the insurance industry.”

Falls worked as a long-term care account representative at the company for five years. He carried that career path over to EBMS and SCL Health during the two years he spent in Montana.

“Ever since I began work at Unum, I wanted to go back to school and complete my bachelor’s degree in business management,” he said. “However, going the traditional route made that goal seem impossible to achieve.

“The thought of working full time and taking night classes a few at a time over the course of many years turned me away from going back to school.”

But as Falls learned more about the online bachelor’s degree programs at UMPI, he knew becoming an Owl was a wise decision.

“The CBE program appealed to me because it was learn-at-your-own-pace and did not follow traditional semester and class guidelines,” he said. “The traditional method of classroom learning would never work for me as an adult who works full-time.”

However, the format allowed Falls to regularly complete one CBE course a week, helping him stay focused and keep his eyes on the prize.

“I kept that pace up except for on a few occasions when a project required more time,” he said. “However, the beauty of this learning format is I could start another CBE course while finishing up the final for another, therefore not slowing down my progress or pace.”

The support from UMPI also helped Falls speed through the program.

“The incredible level of support I received from my academic success coach, Amanda Baker, was surprising,” he said. “In the past, being in school meant sharing an academic adviser with many other students and having to wait to get answers.

“Amanda was always quick to respond to my emails and even took time to speak to me on the phone when an issue did not get resolved. So, even with the distance between Maine and Montana, she was more helpful than any adviser or success coach I’ve ever had.”

Now that Falls has completed the bachelor’s degree, he is thrilled he finally found the right program to realize his higher education aspirations.

“Looking back at what I’ve accomplished in the short amount of time amazes me,” he said. “My determination to finish before we moved back to Maine was a significant factor, but the biggest push was the fact that I wanted to complete the degree as soon as possible. That was a great motivator.”

Falls is excited to see what the future holds for his career. After returning home, he worked for three months in a temporary role at North Light Health before starting at the State of Maine in December 2018.

“Many positions in my career field that will help me advance all require a bachelor’s degree,” he said. “It’s safe to say that now that I have reached this goal, more possibilities have opened up for me to advance my career.”

Even though Falls admits he has never been a big fan of attending school, he encourages others seeking a business undergraduate degree to enroll in one of the CBE programs at UMPI.

“Go for it,” he said. “Seriously, as someone who for years contemplated going back to school but never pulled the trigger, due to fear that it would take many years and lots of money, I would highly recommend this program.

“If you don’t mind working at your own pace and have the ability to push yourself, you can complete this program in a much shorter amount of time than you ever imagined possible.”

Plus, moving to Montana is not required.

Learn more about the UMPI online BA in Business Administration with a Management and Leadership concentration.

Chris Ferranti Earns Second Bachelor's Degree From UMPI Through Online Program
After graduating from the University of Maine at Presque Isle (UMPI) with a dual bachelor’s degree in criminal justice and behavioral science-sociology in 2011, Chris…
Read more
Meaghan Cote Paces Career With Online BA in Business Administration
Meaghan Cote hopes to someday own and operate a home-based equine therapy school for children with disabilities. She took a major stride toward achieving that…
Read more
ACE Student of the Year St. Nicholas Burrus Earns Degree After Heart Transplant
St. Nicholas Burrus has made a habit out of living up to his name. “When I was born, the doctor told my parents not to…
Read more
Have a question or concern about this article? Please contact us.